This past Wednesday night I made my debut on the stage of Mortenson Hall, the largest of the spaces at the Bushnell Performing Arts Center in Hartford, CT. I have seen many concerts and Broadway tours there, but it was my first time actually standing on the stage of this 2700+ seat space. It was also my first time performing with fog, flashing LEDs, a DJ, and an internationally known classical/hip-hop duo. So, you know, just a regular Wednesday night.

I was there as the conductor of a small orchestra made up of local middle and high school students. We joined the performers Black Violin for the encore number, an arrangement of "Simple Gifts" called "Shaker." This piece with youth orchestra is a staple of Black Violin concerts in each city they visit, but usually the orchestra is an existing ensemble. In this case, the Bushnell's director of programming Tom Sessa had the idea to bring together students from four local schools for the experience. (Shout out to Ryan Ford from Simsbury Public Schools, Anna Lasley from East Hartford Public Schools, Kathy Peet from Noah Webster Microsociety Magnet School, and the teachers at the Greater Hartford Academy of the Arts for preparing their students for this performance!) We all met for an hour rehearsal the day before the concert, had a quick sound check and run-through with the band that afternoon, and then watched the first half of the concert from the back of the orchestra section before being ushered backstage to tune and get ready for our big moment.

As we waited backstage for our number, I was struck by how impossible it was to hear anything. Drummer Nat Stokes pounded away on his drum set and an electronic pad, his kick drum reverberating with a tone so deep and strong that it seemed to settle in the bottom of our lungs. Most of the speakers blasting out Kev and Wil's strings and vocals were pointed out at the audience, so from our corner offstage left we had only a vague awareness of melody and lyrics over the booming bass and drums. I understood why everyone in the band wore in-ear monitors (or headphones, in the case of DJ SPS).

The whole process for the youth orchestra had clearly been perfected over the course of the tour. The production manager had started his welcome speech that afternoon by asking the students to put their instruments in rest position (I'm certain he had learned that from a youth orchestra director somewhere earlier in the tour), and reminded the students multiple times to keep their music with them so no one got on stage without it (this has apparently happened). The process of walking on stage was organized to be as quick and efficient as possible. Set lists were distributed to each chaperone to let us know when in the concert it was time to go backstage to tune. The students were in place in the wings several numbers before the finale, I'm sure to account for emergency bathroom trips and the strange space-time anomalies that seem to occur when you are trying to move a group of middle or high school students. When it came time for us to take the stage, the crew sprang into action and within seconds set up the cello chairs, plus music stands in neat rows so that the students would stand in full profile (to allow for a better view of all the students for their family and friends in the audience). As Kev introduced us, I noticed him peek at a piece of paper on the stage that had written in giant letters "LOCAL CT STRING STUDENTS," (He had mentioned earlier in the show that this was something like their 70th concert of the year, and while he knew where they were going to perform the next day, he couldn't remember where they had been the night before.) Even the arrangement itself, with its backing track and incessant pounding beat, seemed designed to ensure that the kids couldn't get lost, even if they couldn't hear a thing or even at times couldn't see their music, as the lights changed colors and flashed on an off throughout the piece.

Before "Shaker," the youth orchestra played a short chorale version of "Simple Gifts" with no electronics, no flashing lights, and no drums. As I lifted my arms to begin the piece, I saw Kev and Wil, the performers of Black Violin, quietly take their places behind the kids and start playing along. I had read about how these two are advocates for music education, but here I could see their passion put into action. They could have been offstage taking a sip of water before the final number, but instead here they were, playing a piece they've probably played hundreds, if not thousands of times, matching the kids' bow strokes and gently encouraging and supporting them. I caught Kev's eye on the final ritardando and he was just as focused on my baton as the students next to him. Just as he had told the students in our rehearsal that afternoon, his performance really was all about the joy of making music.

After a brief moment, the drummer clicked his sticks and we launched into "Shaker." The LEDs flashed to full brightness, and I realized that for the safety of my retinas I should NOT attempt to look in the direction of the second violins. Kev and Wil came to life as well, bounding across stage and showing off their technical facility with flashy runs, then occasionally backing off to the sides of the stage to let the kids feel the rush of energy coming from the audience. There's a false ending close to the end of the piece when the strings resolve on a big chord, and then the DJ track plays solo for eight bars before we all join in again. I had talked to the kids in rehearsal about that moment, about how they should be ready for a whole lot of cheering because the audience would think that we were finished. When that spot came up in the performance, the crowd erupted. I looked across the stage at the faces of the students (the LEDs had settled down at this moment, so I could actually see them). As I counted off the measures and we all prepared to make our entrance for the final crescendo, I saw nothing but ear-to-ear grins. I thought about how long these kids would remember this moment, maybe even for the rest of their lives; how their parents were probably out in the crowd holding up a cell phone to record their kid on the Bushnell stage; how they would go back to school the next day and tell all their friends what it felt like to have over a thousand people cheer for them, and I actually got a little teary-eyed. What a generous thing for Black Violin to have done for these kids, and to continue to do for kids around the country every night of their tour!

The best part of this experience for me, of course, was the kids:

-Ty'Asia, who was so spellbound by the crowd that I had to wave my hands to get her attention before we could start playing

-Kenneth, who didn't really seem to laugh at my jokes as much as appreciate my effort, but whose eyes I would catch, diligently watching me, every time I peeked over at the viola section

-Ben, who took his performance very seriously and responded enthusiastically every time I made a request of the basses

-Jameson, who was so excited when I said that the short kids should stand in front

-Sammy, who sported bright blue hair but was concerned that his tie with music notes on it might be too much for the all-black dress code

-Franchesca, who spoke up in rehearsal when everyone else was too shy to respond

-Cheyenne, who told me I seemed nice, asked me if I'd ever heard of Phantom of the Opera (she is currently working on it in her school orchestra), and then went missing from her teacher and classmates so she could hang out in the dressing room with me and the Academy kids

-Angie, who was already making plans to make some hip-hop cello duets with Sammy the next day in school

I wish I'd had more time together, so I could have gotten to know them all better, especially the quieter ones, and so they all could have made more meaningful connections. I hope they enjoyed themselves as much as I did, and I hope their experience encourages them, as Kev put it, to make music their own. 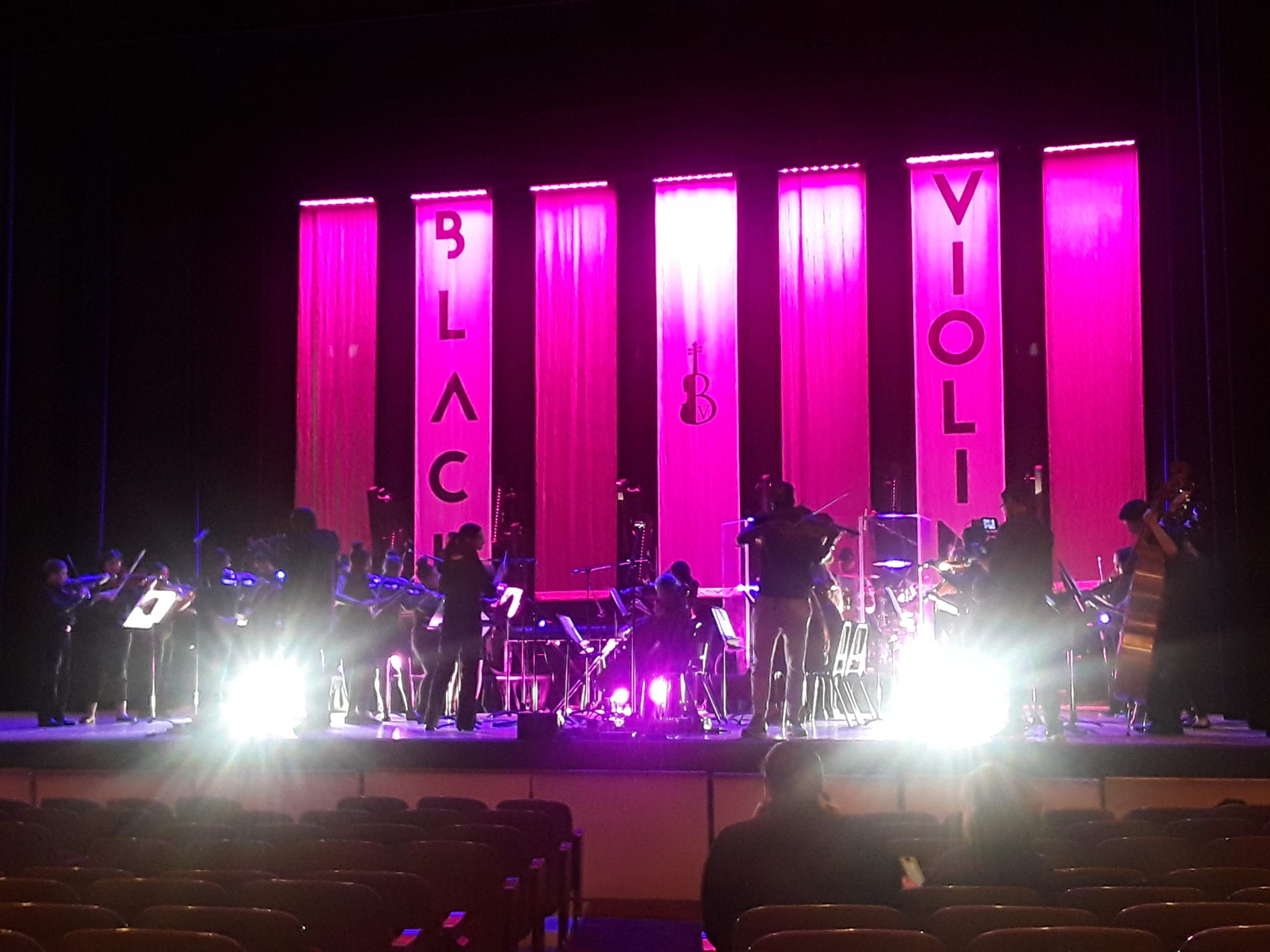